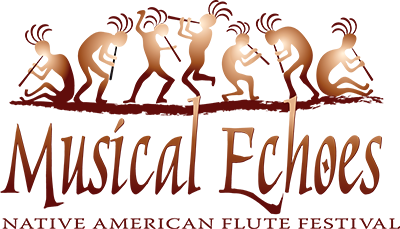 Musical Echoes Native American Flute Festival began in 2001. It was the dream of two dedicated artists, (the late) Doug Reed and David Baxter. It has been held every year since 2001 with the exception of 2016 when the group of volunteers chose to take a break. The public felt the loss of the festival thus encouraging the group of volunteers to coordinate the festival for 2017 and into the future.

At Musical Ehoes you experience a wide variety of Native American music, dancing, and artistry. The perfect location, with the Indian Temple Mound Museum in the background and two Native American Mounds nearby. The festival is held at The Landing, in the heart of Fort Walton Beach, with the Santa Rosa Sound as the backdrop. The view is inspiring, and the music and dance take you back in time to a way of life that is held a deep respect and connection to the land and sea.

To engage artists and musicians, Musical Echoes Festival features an art competition and a flute maker’s competition. All competitors must be present to participate allowing them time to engage with one another, sharing their experiences while expanding their expertise. All participants are recognized at the festival and prize money is awarded to the winners.

Musical Echoes is planned and coordinated by Musical Echoes, Inc., a non-profit organization operated by a group of dedicated volunteers. This three day festival truly provides the opportunity for everyone to experience the Native American Culture and Arts and is always free and open to all.

As a non-profit we function on donations from people like you. We also are always looking for new members of our committee. By joining our committee, you become part of a dedicated group of people working together to preserve the Native American history and culture in the hearts and minds of everyone that attends the festival.